A 6 Sigma Look at Autonomous Vehicles

The idea of “Robot Cars” or autonomous vehicles as they are popularly called is both exciting and frightening at the same time. I have an elderly friend that has never driven on a highway since freezing on an on-ramp during her driver’s education training some 60 years ago! She would love to be able to hop in her car and have it take her safely to her grandchildren via a highway upon which she will never pilot an automobile herself. On the other hand, my “gearhead” hot rod friends quip “Autonomous vehicles… over my dead body!” It is however interesting to note that when I ask these same stalwarts if they would be okay with the car taking over the controls in sub 5mph stop and go traffic jams they seem to have no issue with giving up the wheel. Regardless of where one lies on this continuum, everyone agrees that safety is of paramount concern when discussing the driverless operation of an automobile.

A recent BBC video showing the challenges of partial autonomy demonstrated some of the shortcomings of the Tesla Autopilot. As can be seen in the video, driving scenarios not specifically planned for in a vehicle’s autonomous control system can result in undesirable results (a fancy way of saying crashes!). From a 6 sigma perspective these undesirable results are defects and fall on a scale as below: 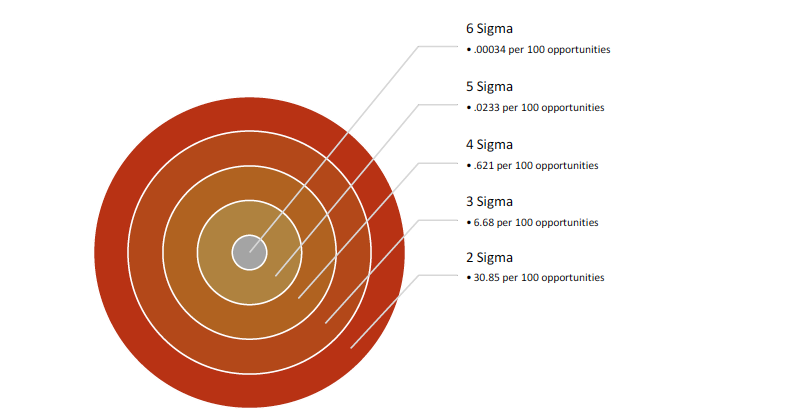 In other words, if an autonomous driving system is operating at a 2 sigma level then a little over 30% of the time it will make a wrong decision. But before we get too hard on the autonomous systems we should remember that humans performing complicated non-routine tasks under high stress have a .25/task error rate and in emergencies, we have a 0.9/task failure to act correctly 1 MINUTE INTO THE EMERGENCY!

So where is the state of the technology today?

Technology currently available on the vast majority of vehicles on the road today is incapable of achieving even rudimentary levels of autonomous operation in a way that improves safety. As I’m writing this I can already hear protests from many of my engineering friends who will disagree with the previous statement. However, there is data to support my assertion. For example, consider NHTSA report DOT HS 811 182 that looked at the long-term effects of antilock braking systems (ABS) on passenger cars and light trucks. Prevailing wisdom would say the ABS has improved vehicle safety. After all, numerous technical studies show that stopping distance is much shorter with ABS and in rainy or snowy conditions ABS preserves some level of steering that would otherwise be lost in a skid. However, the study shows that “ABS has close to a zero net effect on fatal crash involvements. Fatal run-off-road crashes of passenger cars increased by a statistically significant 9 percent”. In fact, the study showed that the most significant increase in crashes with ABS occur on wet, snowy, or icy roads! How is this possible? While the report does not ascribe root cause we can step back and think about the situation and a couple of probable causes jump out. First, during early adoption of the new technology vehicle operators needed to relearn how to brake. I can remember my parents adjusting to our first car with ABS. They had driven for years and had been conditioned to “pump the brakes” when in a skid. The idea of pressing the brake and maintaining pressure while the ABS system pumped the brakes for you was foreign and often a combination of the driver and the ABS system both trying to pump the brakes resulted in devastating results. In my case, ABS was already pretty prevalent on cars when I started driving so I did not have this issue but I did learn to drive in a way that takes ABS for granted. What I mean by this is that I knew that my stopping distances were short due to ABS so I tended to follow the cars in front of me closer. Had I, and everyone else with ABS, maintained the longer following distances between us and the cars in front of us or reduced speeds in slippery conditions in a manner consistent with how it was for drivers without ABS then I’m guessing the NHSTA report would have a very different result. But we didn’t. In effect all ABS did was to add complexity and weight to vehicles which made them more costly to buy, less reliable, and less fuel efficient! An article in MIT’s Technology Review said “For now, though, self-driving cars are only partially autonomous. If the vehicle is unable to make a confident decision, it alerts the driver to take control of the wheel. If the driver is distracted and the autonomous system does not work properly, or if the human places too much confidence in the abilities of the driver aid and ignores the warnings and the road, things can go wrong.” 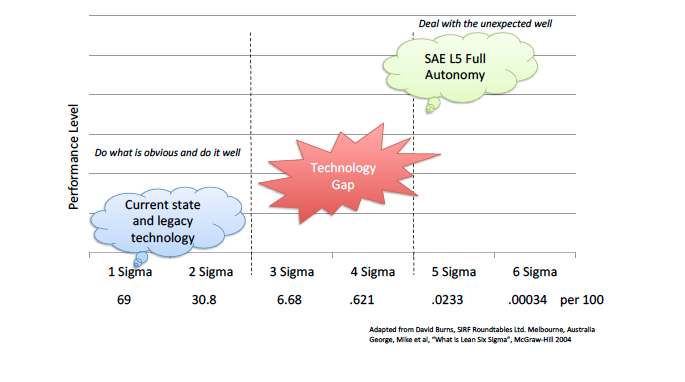 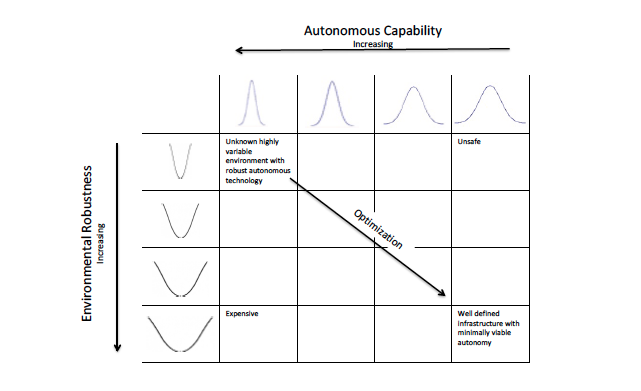 In the graph above we see it is important to first match the autonomous vehicle capability with the level of infrastructure variability it is expected to encounter to ensure safety. Either limiting the environment or expanding the vehicle capability as appropriate can achieve this. The recently announced Voyage project in Central Florida is the largest experiment involving this idea and encompassing 750 miles of roadway in The Villages retirement community. Light Detection and Ranging, or LIDAR systems will be added to both the autonomous vehicles and street light poles. This together with precision GPS mapping and location technology gives the autonomous vehicle sufficient capability to react to likely anomalies and also a robust definition of the infrastructure within which the vehicle will operate.

Note, however, that the lower left of the matrix is not the optimum. While it is true that having an autonomous vehicle with great capability in an extremely well-defined environment sounds good it is also very expensive. For example, the SAE International and General Motors sponsored AutoDrive Challenge™ was held this past April in Arizona. A well-defined closed course was used to test the autonomous capability of Chevy Bolt cars modified by universities in the US and Canada. It should be no surprise that the top performing team was the University of Toronto who also happened to be the only team whose car was sporting a $100,000 state of the art LIDAR system. By contrast, autonomous die carts have been driving 40-ton stamping dies around manufacturing plants for decades without incident by simply following a line painted on the floor or wire embedded in the floor and stopping when a bumper around the cart is touched which activates a simple safety switch. Here an autonomous vehicle with rudimentary autonomous capability is optimally designed to perform in the simple and well-defined infrastructure in which it operates.

TECAT’s WISER systems are used by automotive, commercial, and recreational vehicle OEM’s in test and measurement applications every day. They measure everything from the steering torque felt by a driver turning the wheel to the shift harshness of a transmission to the temperature of the brakes and spindle bearings. This data allows engineers to design the mechanical systems and electronic controls in an optimized fashion for driver effectiveness and passenger comfort. As vehicles become more autonomous these same measurements will tell the computers that replace the human operator what is happening with the vehicle and environment around the vehicle so that informed decisions can be made by the control algorithms.